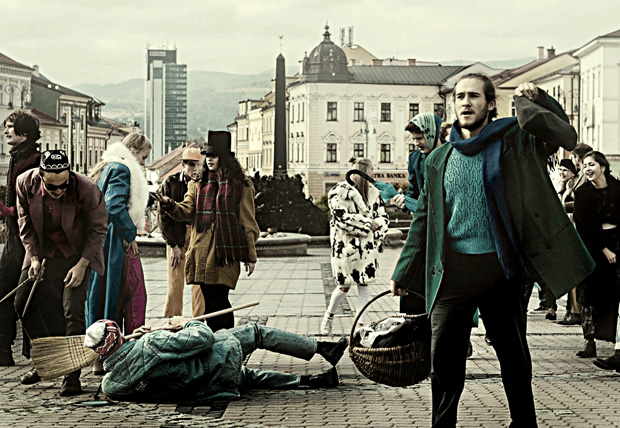 Study program Acting focuses at development of creative student’s dispositions not only in a classical stage acting, but it focuses especially at the preparation of interdisciplinary equipped actors in modern professions of film, television, radio and dubbing acting and multimedia performances. Artistic study of acting has been designed to be taught on three basic levels: psychosomatic, creative and theoretical. First level – deepening and development of one’s own identity and creative individuality. Second level – development of physical expression and speech communication. Third level – the study of theory, art history, predominantly the dramatic one, but also film history. The Bachelor’s level is brought to an end by creating a dramatic character under the teacher’s supervision in a Bachelor’s production within the school premises and the Master’s degree level is completed by individual artistic performance either in the production directed by the teacher of the Department of Dramaturgy, Directing and Theatrology within the theatre studios of the faculty or in a professional theatre.

In the first year of Bachelor’s degree level the students present a monodramatic artistic performance, which presents their individual acting creation. The student acquires: approach to the study within an intercultural context (dubbing, radio acting, basics of film and television action); interpersonal skills related to a teamwork; wide spectrum of both creative and practical skills; creative search and exploration of connections, new views and artistic procedures; creative interpretative and realization techniques; ability to determine connection between piece of art, artistic performance and a spectator and finally the ability to collaborate internationally in conducing of an artistic production and in research work. Students annually participate at Slovak and international theatrical presentations, festivals, workshops and conferences. The graduate from Acting study program acquires knowledge of historical and contemporary forms of theater art. He acquires practical basics of creative processes and methods for creating a stage work. The graduates find work as members of professional theater ensembles, in media, in cultural centers, at senior positions of amateur ensembles and dramatic unions of artistic schools and in a wide spectrum of artistic, educational and organizational work. They obtain a creative personality in the field of acting and all its spheres (theater, television, film, radio, dubbing). The studies are concluded by realization of a complete artistic project (in the fields of theater, radio, film or television).