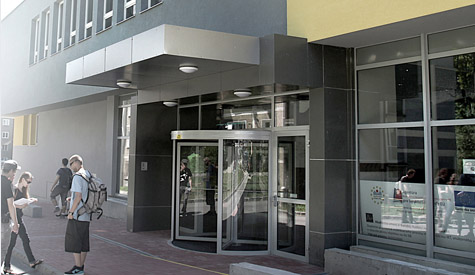 Academy of Arts (AA) in Banská Bystrica was founded on July 1, 1997, as university specialised in arts, comprising Faculty of Music Arts (FMA) and Faculty of Fine Arts (FFA).

FACULTY OF DRAMATIC ARTS (FDA) was established by the decision of Academic Senate of Academy of Arts in October 1998 (with effect from January 1, 1999) at the Department of Acting and Direction under the Faculty of Music Arts.

By its resolution, the Slovak Government earmarked funds for the purchase of Cultural House of Building Construction in Banská Bystrica for the needs of pedagogical activities of FDA. The building has undergone extensive reconstruction in a few years and at present, the FDA is spatially and technically equipped at top level. Apart from a film studio, a large-scale lecture and cinema projection hall, a dubbing and a sound studio, the faculty uses three theatre venues for teaching academic subjects - FDA's newly reconstructed Theatre Studio with a capacity of 120 spectators, a chamber stage in Klub HaD with a capacity of 50 spectators, and Studio D44 with a capacity of 44 spectators in the basement of the historical building of the State Scientific Library in the town of Banská Bystrica. Since the faculty’s founding, the quality of pedagogical process has been guaranteed by significant figures of Slovak and foreign theatre culture and film art. In the field of Dramatic Art, it was actors, theatre and television directors, theatre critics, dramaturgists and theatrologists. The Faculty of Dramatic Arts has undergone internal restructuring during its fifteen years of operation thus contributing to the expansion and improvement of study programs and teaching staff.